To this day Banda Bacana have built up a strong reputation for being a dance band and have gigged far and wide across the country bringing Afro Latin funk to people’s ears. We play a variety of different events, from Weddings and party’s, to pub and club gigs, right up to mini and larger festivals.

Just ask anyone who’s heard us and they’ll testify that they had trouble staying still because the grooves can REALLY grab you by the hips and make you swing. 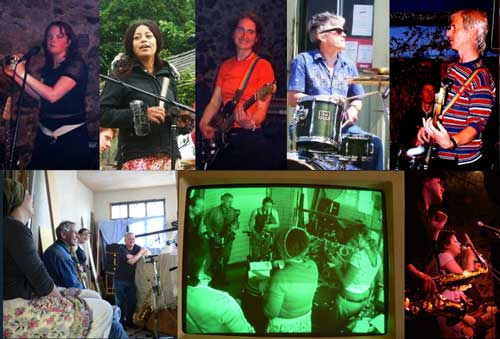 Banda Bacana started out in 2003 as an offshoot of the local samba band in Bangor. John and Kate decided it would be a fun idea to get together and play some Bossa Nova’s with some percussion from Simon, Saxophone sounds from Sandy and some sassy vocals from local singer Joy Lily. The gigs they were playing were local events held at the Greenhouse, Shekina and local pubs where they became more and more popular going on to play mini festivals at Hendre Hall with Byd Mawr.

At this point Ceri joined the band every now and then with some extra percussion along with local Samba celebrity Johnty. This was lots and lots of fun and the bacana’s just enjoyed playing their sweet sounds to the eager crowds.

In 2004 Sandy left for the sweeter grass of New Zealand and we were joined by the lovely Marie-Claire on saxophone then Joy Lily and Johnty parted company with the band. Kate said that her neighbor Lou Lou could sing so she was invited along to a practice with Ceri to play some lovely tunes and they all hit it off straight away discovering that their voices fitted together and their harmonies worked. We were then joined by another sax player the young budding Chris Goodman who was as fresh as a daisy and really brought some new energy to the band. We also decide to recruit a drummer, Ed, who added a different but more funky element to the band. Ed then left to go to university not that long after and not being able to find a drummer Ceri stepped in until we found Owen Hughes, some bloke who owned a record shop and was quite handy with a pair of sticks.

In 2005 our lovely conga player Simon parted us and it was decided that Ceri and Lou Lou would learn the conga’s and take it in turns to sing and play. When Marie-Claire left us to have a baby she was replaced by the young Kate Browning, who along with Chris added to the young whipper snapper sax section.

It wasn’t until around this time that we found Jochen, a jazzer from the mountains, who added an element of sophistication to the Bacana sound. By this point the band was gigging on a a regular basis, with a residency at the Greek Taverna, at many party’s and festivals around the local area.  When Chris and Kate both left at the same time to university it was a big loss but we still had Jochen and then some idiot discovered Jeff … ha ha only joking … Jeff’s earthy soul vibe really complimented Jochen’s eery jazz haunts.

In 2010 Lou had a baby and Owen fell Ill, this really rocked the Bacana boat and really tested their agility, luckily they’d found a fantastic all around drummer and percussionist Mike Mcmahon who really brought some new energy to the band, and Ceri stepped in on lead vocals….we now fluctuate from 6 – 9 members include a one Neil Browning who really CAN play every musical instrument under the sun and there we have it…the history of Banda Bacana.