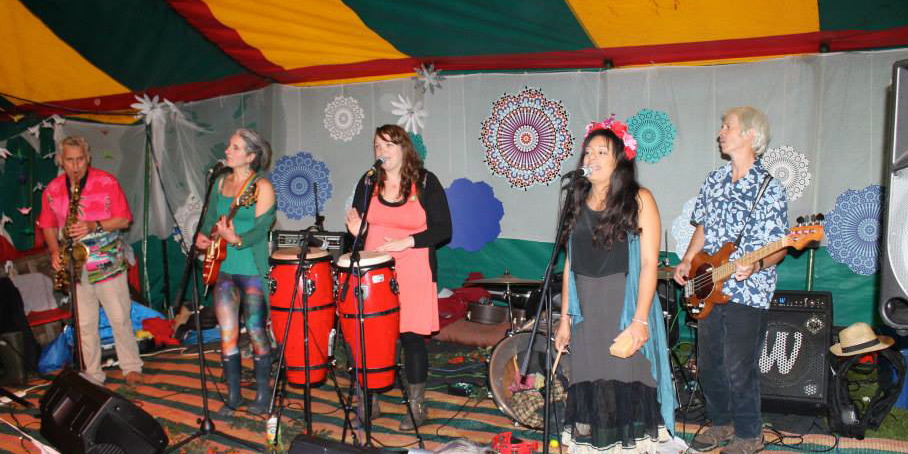 Well what a summer it’s been for the Bacana crew, and what an action packed foray of gigs we have to report back too! Since our last post advertising the amazing Gwyl Arall, we can now tick “play in a Castle” off our “to do” list, and, we not only played in a Castle but got to share the bill with some of Wales’ finest musicians, Yr Ods, Lleuwen Steffan and the one and only Geraint Jarman. We arrive for sound check around 5ish and then head over to Oren for some of Gert’s fine cuisine to provide us with sustenance for the gig. We then head back to the Castle, which is filling up with camping chairs and bottles of cava; these guys look set for a party! They were a tough crowd to get up and dance but seemed to be enjoying in none the less, we were also enjoying jumping around on stage with our fantastic Accordian/Trumpet player Neil Browning who is always full of energy and enthusiasm. As we didn’t have Lou (one of the lead singers) we felt we needed percussion back up so we enlisted the help of Conga player Colin who provided a much-needed groovy beat to compliment Drummer Owen’s solid drumbeats. The main act was fantastic as always, it was then clear why no one got up to dance before as they were all saving their energy to unleash during Mr Geraint Jarmans stonking set, the finishing touches of fireworks during their last number provided a good finale to a magical evening.

August was a quiet period as most of the band was off holidaying in various locations including Jochen who took a trip to Brazil to soak up the musical atmosphere. We played a lovely wedding at Bodnant food Centre mid-august which we enjoyed as the venue has been revamped and in a better shape to jump up and down to funky music.

Now on to our Indian summer and a fun filled Saturday around the Llanberis area. Kicking of at Y Caban, Bryn Refail for ‘Parti Pentref’ (Village Party) featuring good old fashioned Tombola, more of Snowdonia’s finest musicians and the main event of a snail race. With just enough time to scoff a scone we head down the road to Y Fricsan to squeeze in quick set at a wedding in a marquee. Then to the final destination of the evening, The Heights Llanberis, oh what a night remember! Picture the scene…a famous heartthrob act such as Elvis or The Beatles who have girls swooning over them throwing under garments at them whilst on stage…they’ve got nothing on us! Erm…enter a pub filled with excited adrenaline filled participants from Man vs Mountian race taking place earlier that day, et voila! End of the set looming, last number called and…. Aha the T-Shirts come off and make there way onto stage draping various instruments and people with their B.O drenched aroma! Ew! Yes that’s exactly what we’re thinking but apparently it’s a token of appreciation, oh well then that’s fine then lets get on with some dancing!

The last but by no means least gig to date was Palas Prints in Caernarfon, where author of ‘Last Record Shop Standing’ Graham Jones was giving a talk and a presentation of his latest book and film about the decline of independent record shops. We finished off the evening with a few acoustic songs before purchasing the latest copies of book and film, then heading off into the night to polish our brass and sharpen our drumsticks ready for the next gig.